Although Nabab de Rêve himself has deceased about four years ago, his offspring still keeps his legacy intact. Last weekend, they were once more quite pervasive, everywhere they competed. VDL Glasgow vh Merelsnest for example, became second in the GP5* of Doha with Jur Vrieling and Naccord Melloni was victorious twice in the Polish capital Warschau with Wojciech Wojcianiec, once in a Table C-class (1.45m) and additionally, also in the three star GP. The latter class also had a daughter of Nabab de Rêve in second place, namely Ilatina with Radoslaw Zalewski.

Julien Anquetin and Gravity of Greenhill became third in an excellent fashion in the GP of Montpellier (1.55m). Noelle Barry and Jolie van het Molenhof even bettered that performance by finishing second in the GP of Gorla Minore, after already ending fourth in a 1.40m-class. Also in Gorla Minore, Paolo Adorno finished fifth over 1.45m with Fer Z.G. and at the WEF, there was a fifth place for Lorenzo De Luca on Ensor de Litrange LXIII in the GP5*.

Vigo d’Arsouilles’ offspring also did their very best, for example through the performances of Golden Hawk (ex-Figo de Muze), who became fifth in a 1.50m-class in Doha. Christoph Kläsener and Abanta van de Huiskens topped it off with a seventh place in the GP3* of Herning in Denmark.

Our other stallions also had some descendants in the picture. Lely vd Bisschop (s. Elvis Ter Putte) jumped to a third place in a 1.40m-class in Warsaw with Sabrina Van Rijswijk. Eugenio Grimaldi and Minerva G.I.H. Z (s. Malito de Rêve) added a seventh place in the GP to that. Shindler de Muze-son Great Miracle also became seventh, but this time in the GP of Royan with Jérôme Gachignard in the saddle. Finally, in the classes for seven-year-olds in Vejer de la Frontera, there was yet another victory for Gotham City PL (s. Filou de Muze), this time ridden by Omer Karaevli. 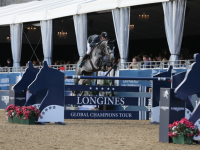