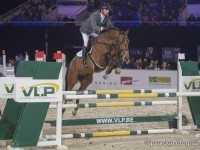 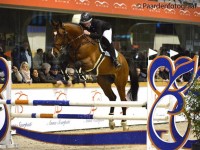 A division lower, in the six-year-old class, the offspring of Elvis Ter Putte impressed once more. Not only was the second spot for Mithras de Regor, son of Elvis out of Centa de Muze (f. Cento) and then back to Qerly Chin, but two other progeny qualified for the jump-off. One of them was our own Mosito van ‘t Hellehof (mf. Nabab de Rêve), who was ridden by Karline De Brabander and landed in eight place with a nice double clear. The other one is called Moneymaker van ‘t Meulenhof (mf. Vigo d’Arsouilles) and jumped to fifteenth spot with Bernardo Mathias.

Same story in the category for stallions with the age of five, with Elvis Ter Putte offspring once again catching the eye due to clear rounds from Nono van de Withoeve and Nestor de Mariposa. Navajo van ‘t Vianahof (f. Vagabond de la Pomme) also seems on track to fill the footsteps of his already illustrious half-brother Inca Boy van ‘t Vianahof and delivered an excellent clear round with Walter Lelie.

Short clips of the stallions will appear on our Facebook-page during the week. If you can’t wait, please head over to our YouTube-channel.

Recently it came to known that one of our former stallions has been sold to the US and is now ridden by Wesley Newlands. We are of course talking about Hos d’O, who already grabbed a fifth place in a 1.45m-class with his new rider, while his daughter Gerdien van Oldenhoff (mf. Vaillant) landed in third place in a seven-year-old class in Vilamoura.

Our stallion brochure, edition 2018, is totally at your disposal. The lovers of some shiny paper should thus send an e-mail to info@jorisdebrabander.be so we can deliver it to you right away.