Amazing performances last weekend by our half-brothers Lector vd Bisschop (f. Bamako de Muze) and Fantomas de Muze (f. Sandro Boy) in Hamburg. Lector did not concede any penalty during three days of competition and topped that off with an excellent seventh place in the final for seven-year-olds (you can find videos from his performance on our Facebook). Fantomas contributed as well to the success of Stal de Muze with a second and an ninth place in a 1.45m and a 1.50m-class respectively.

Some more Shindler de Muze in the other five star competition of the weekend. This one took place on the other side of the North Sea, more precisely in Windsor. It was Gentiane de la Pomme that showed her brilliance once more. With Wilm Vermeir, the chestnut mare won a class and also finished fourth in another one.

In the Norwegian city Drammen and in the Dutch city Eindhoven there were three star competitions on the menu. The stand-out performance in Eindhoven was achieved by Demi Van Grunsven and Tinka’s Hope (f. Tinka’s Boy), who was bred by us. The duo became fifth in the GP.

In Drammen, it was Kirby de Muze (f. Nabab de Rêve) who jumped into the spotlights. With Marit Haarr Skollerud, Kirby jumped to a second place in the Derby (1.45m). Also in Drammen, Maria Louise Kingsrød rode Feloetsghe v/d Rhamdiahoeve (f.Querlybet Hero) to some silverware in the GP1*.

Some more noteworthy performances at the two star competitions. For starters, in Opglabbeek, there was a second place for Cederick Deknudt and Beijing Z (f. Bamako de Muze) in a 1.40m-class. In Fontainebleau, Kevin Staut rode his new recruit Equador van ‘t Roosakker (f. Nabab de Rêve) to a fifth spot in a 1.45m-class and finally, in Valkenswaard, Max Nieberg won a class 1.40m with Nabab de Revel (f. Nabab de Rêve).

As usual, we end with a brief overview of the performances of the young offspring of our stallions. We start at Sentower Park, where Mimi de Laubry (f. Elvis ter Putte), Pikap de Muze (f. Ponsee V) and Malissa de Muze (f. Vigo d’Arsouilles, half-sister to Fantomas and Lector) achieved one or more placings in the classes for six-year-olds.

In Montefalco, Turkish rider Omer Karaevli was victorious for the second week in a row with Hayley (f. Glock’s London) in the classes for six-year-olds.

The main role in the classes for five-year-olds in Valkenswaard was reserved for I’m Special CB (f. I’m Special de Muze), who impressed with a victory and two times a third place (including the final). Ramzy Al Duhami rode Natil (f. Bamako de Muze) to a fifth place in the same age category.

One year above, once more a magnificent performance by Mosito van het Hellehof (f. Elvis ter Putte). With Karline De Brabander this superstar to be once more made no mistakes, making it six international courses in a row without a single penalty. Finally, L'Hermes de Muze (f. Elvis ter Putte) also participated with Karline in Valkenswaard (in the CSI1*) and the duo also did not concede any penalty over the three days combined. 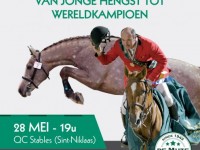